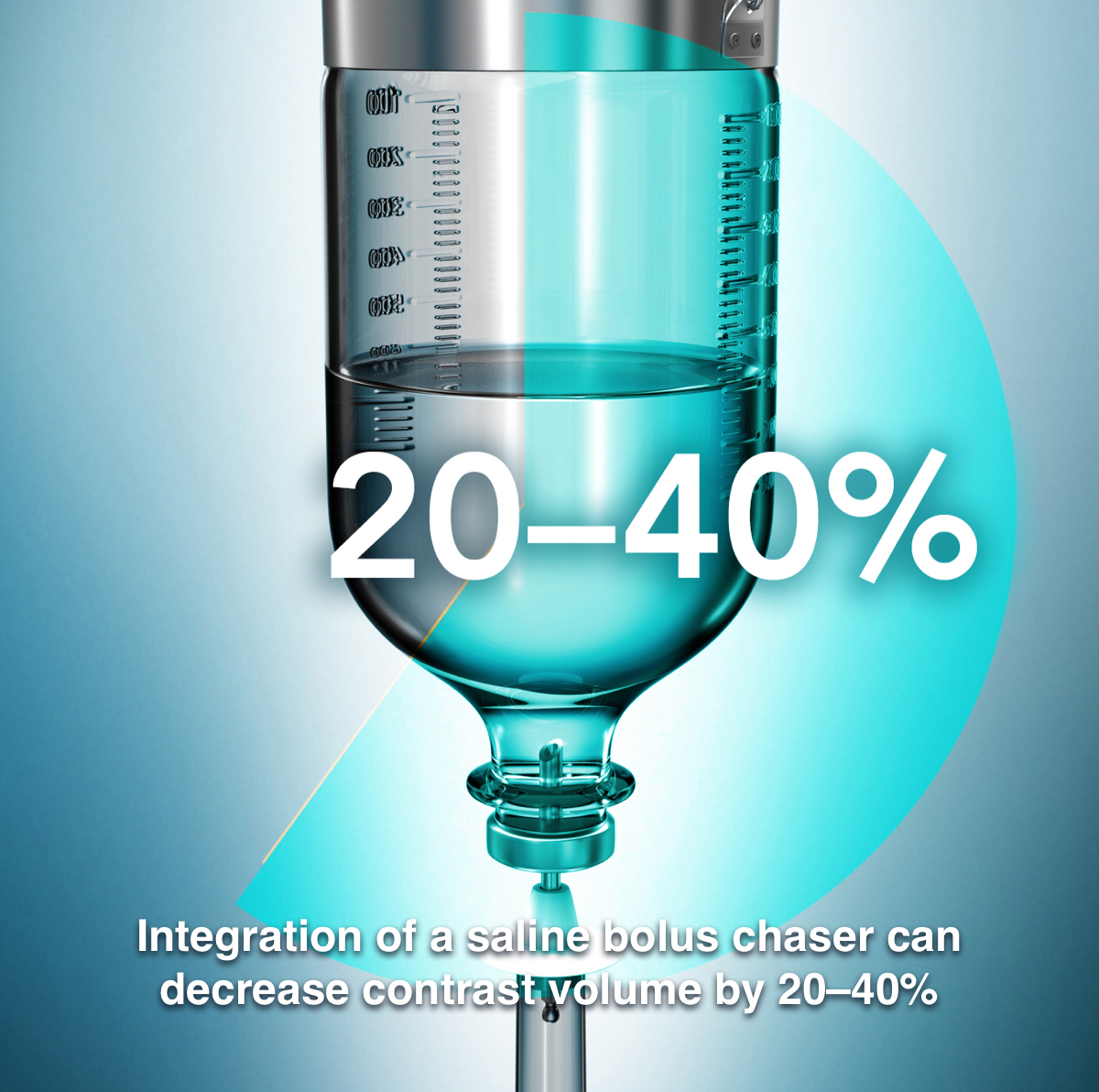 Powered injection systems for computed tomography (CT) were first introduced in the mid-1980s. Since these systems control the timing of contrast delivery via adjustments to flow rate, volume and injection duration, the goal was, and is, to optimize target organ opacification to enhance contrast resolution.1

“The initial protocols were sufficient for early generation CT scanners,” noted Mark A. Auler, MD, and colleagues, “however, as the CT scanner technology advanced, the injection protocols were no longer able to reliably optimize peak enhancement.”1

Fortunately, a number of developments in the past few years have positively impacted CT imaging, including the use of multi-detector row computed tomography (MDCT) technology, usage of nonionic contrast material, and the use of saline flush.

Use of a saline chase technique can reduce the total amount of contrast media needed. A bolus chaser of a saline solution pushed through the injection line right after the injection of the main bolus can yield a significant reduction in required contrast material (CM) volume with vascular attenuation similar to that observed with larger volume.2

In fact, use of a saline chaser can reduce required contrast material (CM) volume by 20–40 percent and lower the incidence of artifacts, all with the same—or superior—arterial enhancement.3

Nonionic contrast materials play an increasingly important role in medical imaging. However, potential nephrotoxicity and cost have been important concerns, which “has compelled radiologists to investigate the possibility of reducing the dosage of contrast material without compromising the quality of the examination.”1

In this regard, several studies have shown that, if saline flush is used, between 15 and 50 mL of contrast material can be saved.1

Hospitals that have an injection system—including injector, disposables and bulk contrast media—designed to “bank” the contrast reductions to patients can save $60,000 per year if 5,000 injections are performed. This amounts to a savings of $12 per patient.

In fact, CM-reduction benefits have also been shown in multislice CT (MSCT) coronary angiography, where required CM has been reduced by as much as 35 percent, along with resulting cost savings and decreased risk of contrast-induced nephropathy (CIN).1

In addition to the reduced risk of CIN and increased cost savings, there’s less waste due to the lower contrast volume associated with the use of saline chasers1 and, more recently, with the use of automated “saline jump” features, as found in Bracco SmartInject injector systems.5

According to Dina Pfenning, RT(R)(MR), DAS, Device Applications Territory Manager for Bracco Diagnostics based in Colorado, EmpowerCTA® “Injectors also feature a Saline Jump, which enables the technologist to reduce amount of contrast delivered to the patient while simultaneously optimizing enhancement.”5,6 This also eliminates the need to manually flush the patient IV to clear out the contrast.6

“That’s a win-win situation for everybody,” Pfenning told Applied Radiology.5 “When techs become comfortable with the saline jump feature, you can see their faces light up because they recognize that they are improving patient care by delivering a reduced amount of contrast, yet images are still optimal. And they’re giving a nice saline flush after the contrast injection which hydrates the patient.”

This feature allows for the immediate advancement to saline (once opacification has been reached), minimizing the contrast a patient receives.