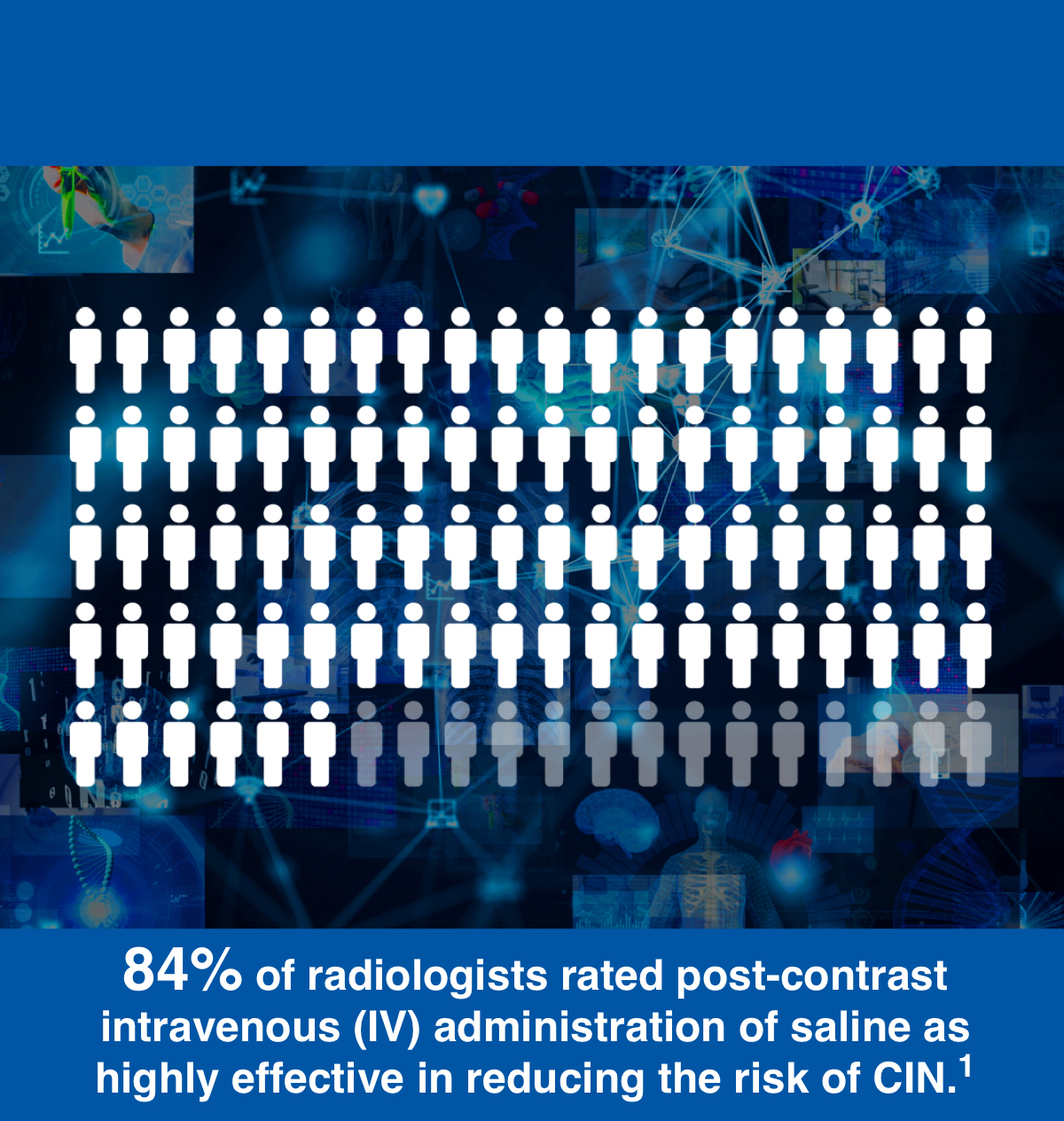 Contrast-induced nephropathy (CIN) is a serious complication of the use of contrast media (CM) and is the third most important cause of hospital-acquired renal failure,2 accounting for 12% of all cases.3

In addition, the indications for use of CM have expanded in recent decades along with advances in interventional techniques, fast multislice CT, and three-dimensional reconstruction techniques.1

Although various measures have been recommended to prevent CIN in patients receiving contrast in CT, there is a paucity of evidence to indicate that the incidence rate of CIN is declining.1

However, one measure that has shown both consistent efficacy in supporting best contrast practices and reducing the incidence of CIN is pre- and post-contrast administration of intravenous (IV) saline.

The Importance of Intravenous (IV) Saline

There are clinical benefits to administration of saline after contrast injection, including reduced incidence of contrast-induced nephropathy (CIN).

Randomized studies have found IV hydration with normal saline to be effective in the prevention of CIN and recommended for patients of all risk categories; in fact, it is considered mandatory in the management of patients with kidney disease.

According to Fishman and Reddan,1 in a survey of radiologists participants were asked to rate the efficacy of specific interventions for lowering the risk of CIN—84% rated post-contrast intravenous (IV) administration of saline as highly effective.

Importantly, IV administration has been shown to be markedly superior to oral hydration. In fact, in a small randomized controlled trial in patients undergoing cardiac catheterization, those patients receiving unrestricted oral fluids were nine times more likely to develop CIN than were those receiving IV normal saline hydration (1 ml/kg/hour) for 12 hours before and after the procedure.5

In their 2008 review, Thomsen and colleagues concluded that, “extracellular volume expansion seems to be the most effective of all the measures used to prevent CIN,” adding that, “The hydration regime should start before and continue for several hours after CM exposure.”6

In fact, after reviewing the available evidence, the CIN Consensus Working Panel concluded that IV hydration is the “only strategy that has been shown consistently to reduce the risk of CIN.”7

Using post-contrast administration of saline also supports best practices, according to the American College of Radiology, which notes that the reported incidence of post-contrast acute kidney injury (PC-AKI) can be decreased by post-contrast saline.8

In addition, supporting patient hydration via post-contrast IV fluid hydration is considered to be “the mainstay of practice in the prevention of CIN,” in that it is low-risk, poses few side effects and is cost-effective.9